HENDERSON, Nev., -- Sol-Jay Maiava of Kahuku (Hi.) wasn't just one of the best quarterbacks at the Pylon 7on7 National Championships on Saturday and Sunday in Nevada, the 2020 standout was one of the youngest. Making a wide range of throws, showing great poise and displaying a strong command of the offense, Maiava guided his team deep into the event. Despite his age, well-known programs have taken notice. Already, Maiava claims early offers from Michigan, Utah and Fresno Stat

They did it again!

Mahalo to coach Brandyn Akana and our state champion Kahuku varsity boys basketball ball team for a 2nd day of officiating for the PAL games @ Laie Park . . . and on a Saturday morning no less. Taimona and coach Akana Service with a smile - the Sauvao brothers, the Kaniho brothers, and a friend. #TaimonaWright #BrandynAkana #RobbieSauvao #CodieSauvao #KekaulaKaniho #KaonohiKaniho

Elvis Vakapuna. Photo: Honolulu Star-Advertiser And the bias continues! I thought this ended years ago with the advent of state tournaments. Apparently NOT! This is the 3rd state tournament in this school year alone that Kahuku has been robbed of a true top seed. First it was our volleyball girls. Then it was our football team. Now it's our basketball boys. My understanding is that a number 1 seed earns the right, by it's regular season success and media influence, to have th

The name atop Hawaii Prep World’s end of season girls pound-for-pound rankings is the same as it ever was. Kahuku’s Teniya Alo follows her sister, Teshya, as the state’s best after an unbeaten season capped off by her second state title with a dominating performance including pins in her four matches. Teniya started the season outside of the top spot but took her rightful place after moving up to 145 to beat Radford’s Angela Peralta. The closest wrestler to Peralta’s caliber

PAGO PAGO, American Samoa — American Samoa's longest serving non-voting delegate to the U.S House of Representatives Eni H. Faleomavaega died Wednesday. He was 73. His sister-in-law, Therese Hunkin, didn't disclose the cause of death but said he died at his home in Provo, Utah. "He passed away peacefully at his home surrounded by family and a few close friends," Hunkin said in a brief phone interview from Provo late Wednesday. House Speaker John Boehner, second left, of Ohio

Eni Faleomavaega, who served 13 terms as delegate from American Samoa, dies at 73

House Speaker John Boehner, second left, of Ohio participates in a ceremonial House swearing-in ceremony for Del. Eni H. Faleomavaega, third from right, D-American Samoa, on Capitol Hill in 2011. (Susan Walsh/AP) Eni H. Faleomavaega, American Samoa’s longest serving non-voting delegate to the U.S House of Representatives, died Feb. 22 at his home in Provo, Utah. He was 73. A sister-in-law, Therese Hunkin, confirmed the death but did not disclose the cause. The House delegate

Hawaii ramps up its recruiting effort

Kapolei quarterback Taulia Tagovailoa watched the ball tumble away after being strip-sacked by Kahuku’s Miki Ah-You in the state semifinals last year. Ah-You picked up an offer from Hawaii on Tuesday. Photo by Jamm Aquino/Star-Advertiser. Exactly three weeks ago, the University of Hawaii announced the signing of 23 players to its 2017 recruiting class. Not a single one was home grown. Fourteen of the 19 local players to sign with a Division I school were offered by the Rainbo

It was great for the kids to see our varsity boys state championship basketball team giving back to the community that so faithfully supports them. The cherry on top was the fact that they were providing service in a sport they love. What a great example for the kids. The adults were pretty proud too! The boys also made some time for photo ops with their young fans. The most endearing act came by way of Jessiya Villa taking this great photo with my son Benson. He followed tha 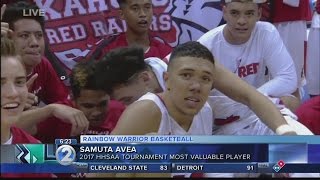 The Kahuku chop had never been used to hack down the nets until Samuta Avea lifted the Red Raiders high enough to reach. Avea, a 6-foot-6 senior wing, guided Kahuku to its first-ever boys basketball state title last week in a 70-55 win over Punahou with 20 points and 11 rebounds. It was a poetic location for Avea to trim the twine, as the future Rainbow Warrior saved one of his best games of his prep career for his future home: the Stan Sheriff Center. “It was special,” Avea

Kahuku fans celebrated the Red Raiders’ first boys basketball state title. Photo by Cindy Ellen Russell/Star-Advertiser. There is no closet space for excuses, but there is a prayer closet for the devoted. All the years that Kahuku had enough talent and schematics and willpower to capture a boys basketball state championship — three seasons of reaching the finals, to be exact — those elements were not quite enough. Three times, Kahuku fell at the hands of private-school progra
1
2345