Smith pumps in 27 as Kahuku rallies past Campbell

At 6 foot 10, Galen Tolu Smith, left, rises above the door jamb leading into the Kahuku gym. At right is his father, Galen Smith. Nick Abramo / Honolulu Star-Advertiser. Tolu Smith is just a high school senior, and he is the real deal. His spin moves near the block recall a young Hakeem Olajuwon, though the “Dream” was a college freshman when he was unveiled to American roundball enthusiasts. Smith’s soft touch near the rim? Very Timmy. As in Tim Duncan, which isn’t a stret

Samson Reed announced his commitment to Virginia in the summer and, following another cross-country trip last weekend, is completely locked in with the Cavaliers heading into the early signing period next month. The three-star defensive end from Kahuku, Hawaii, took his official visit to Charlottesville and, although his future team fell to rival Virginia Tech in a close battle, he told 247Sports the experience was not tarnished. "I had a lot of fun learning about the program

The Lady Raiders of Kahuku are in the midst of a scheduling gauntlet, but Coach LaToya Wily wouldn't have it any other way for her young team. Paul Honda/Star-Advertiser (Nov. 25, 2017) There was a time, not so long ago, when LaToya Wily and Chico Furtado were not coaching counterparts. In fact, Wily was one of the top hoopsters in the state, and she departed from Kahuku to play at Furtado’s girls basketball juggernaut at Kalaheo for a season. Furtado, now coach at Maryknoll,

Mahalo @unkojohn for representing #BigRed with such class, dedication, and perserverance! [Full Spec 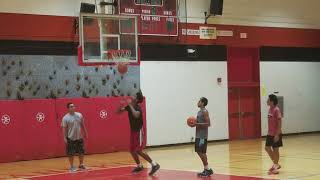 My son Jamerus has had the privilege to be able to have some practice reps with Coach Akana and Coach Wright the past two summers. These two coaches have been very gracious in allowing all area kids to come and participate in their open gym regardless of what school they attend. The past couple of summers the kids have come at least from Kahuku, Kamehameha, and Iolani. Then this past August and September the boys were able to practice with Galen "Tolu" Smith, III. He's a very

Kamehameha defensive end Jonah Welch, who will play in the Polynesian Bowl in January, has committed to Navy. Photo by Craig T. Kojima/Star-Advertiser. Kamehameha senior Jonah Welch [Straight From The Bush alert - is the son of David Welch a 1987 grad], a 6-foot-2, 230-pound defensive end, has given an oral commitment to play football at the U.S. Naval Academy. He announced the decision on Twitter with a video. Welch had seven scholarship offers and chose Navy over Air Force,

The appetizer was so very good that it seemed quite possible that the main course would turn out to be bland. But instead, the third game of Saturday’s tripleheader at Aloha Stadium was a crazy-good show-stopper for football connoisseurs and an incredible capper for Hawaii’s football-hungry fans, who got an extra-sweet treat in the first game of the day — Lahainaluna’s 75-69 seven-overtime win over Konawaena in the D-II championship game. With a kickoff at 9:58 p.m. Saturday,

At 6 foot 10, Galen Tolu Smith, left, rises above the door jamb leading into the Kahuku gym. At right is his father, Galen Smith. Nick Abramo / Honolulu Star-Advertiser. The Kahuku basketball team will be defending its Division I state championship this year, and the arrival of Galen Tolu Smith, a transfer from Mississippi, might make it just a bit easier. The 6-foot-10 senior center/forward who enrolled at the school in the fall recently signed a letter of intent to play for

Saint Louis’ epic win over Kahuku one to remember

STEVEN ERLER / SPECIAL TO THE STAR-ADVERTISER Saint Louis receiver Jonah Panoke made the game-winning 53-yard touchdown catch by pulling the ball from Kahuku defensive back Alex Fonoimoana-Vaomu during the final seconds of the First Hawaiian Bank/HHSAA Open Division State Championship game at Aloha Stadium. It was 1:04 a.m. Sunday at Aloha Stadium and not a single person out of the 22,436 in attendance sounded tired. Whether it was the euphoric jubilation from the Saint Louis

John John Florence made his highly anticipated debut in the Vans Triple Crown of Surfing on Sunday, and although he didn’t win his four-man heat at the Hawaiian Pro, he placed second and advanced to the fourth round. In choppy conditions, Florence hit the water in front of a large crowd waiting for his appearance at Alii Beach Park in his hometown of Haleiwa. The defending world champion is the World Surf League ratings leader heading into the tour’s final stop at Pipeline ne