From freshman to senior year, here’s what recruitment looks like for prep-school QBs

Sol-Jay Maiava says moving from Hawaii to the D.C. area to play football at St. John's "the best move of my life." (Doug Kapustin/For The Washington Post) Who would've know what Sol-Jay Maiava got himself into two and a half years ago. Nobody could've imagined, except maybe Sol-Jay and his family, that he would lead a St. Johns College team to navigate arguably the toughest schedule in the country . . . two years in a row! I've followed his journey from afar as closely as I c

Quarterback Sol-Jay Maiava spent two seasons at Kahuku before transferring to St. John's College in Washington D.C. Star-Advertiser file photo. Sol-Jay Maiava has been busy building his football resume in Washington, D.C. The former Kahuku star — who is a three-star recruit committed to play for BYU — is the senior starting quarterback for the St. John’s College High School Cadets, and they are playing a grueling 2019 schedule. Maiava starred for the Red Raiders here in Hawai

Sol-Jay Maiava bursts into open space! BYU coaches got a couple of nice Father's Day gifts on Sunday night. Quarterback Sol-Jay Maiava, a three-star prospect from the Washington, D.C., area, and American Fork three-star receiver Devin Downing both committed to play for the Cougars. Maiava, a 6-foot, 190-pound high school senior, included a touching tribute quite fitting of the holiday in his announcement. "I would like to thank my HEAVENLY FATHER for bringing my father into m

Sol-Jay Maiava surveys the field against Campbell in the 2017 OIA Semi-Finals. Provo • For the second straight year, BYU has landed one of the top high school quarterbacks in the country. Sol-Jay Maiava, a rising senior at St. John’s College High School in the Washington, D.C., area, announced via Twitter on Sunday afternoon that he has committed to BYU coach Kalani Sitake. Maiava, who grew up in Hawaii before moving to the East Coast before his junior season, is the No. 23-r

Andrew Gentry, an OL from Colorado, and Sol-Jay Maiava, a QB from Washington, D.C., by way of Hawaii, are considered must-gets Cougars as search for 2020 stars heats up Provo • Although there is still the matter of running back Ty’Son Williams getting accepted into a graduate program at BYU, Cougar coaches were thrilled a few weeks ago when the transfer from South Carolina announced via Twitter that he hopes to exhaust his final season of eligibility in Provo. However, the mo

Kahuku Red Raider football player Robert Sauvao unleash a pass to teammate Lokana Enos against the Saint Louis Crusaders in a game Friday night at Aloha Stadium. George Lee / Star-Advertiser Most football teams have off years. Kahuku, usually, is not one of them. But this year, despite the fact that the Red Raiders made the final four of the Open Division, will go down as an off year. They finished 7-5 and ended it by getting beaten by rival Saint Louis 49-22 in the Open Divi

WASHINGTON — Like a sudden rush, the emotions at hand and those tied to family sacrifices swept over St. John’s quarterback Sol-Jay Maiava. After heaving a 66-yard touchdown to Cam Ross to effectively seal what would be a 34-17 win over rival Gonzaga, the junior quarterback slowly paced back to the sideline in tears. Few knew what exactly was going with Maiava, as coaches and players attended to their leader. Over the summer, Maiava moved from his native Laie, Hawaii to the W

St. John’s quarterback Sol-Jay Maiava (No. 9) and the Cadets will play Gonzaga again in the WCAC semifinals next weekend. (Samantha Pell/Washington Post) St. John’s quarterback Sol-Jay Maiava walked off the football field at Gonzaga three minutes into the fourth quarter and burst into tears. Maiava had just thrown a 66-yard touchdown pass to wide receiver Cameron Ross to help secure what would be a 34-17 victory for the No. 1 Cadets on Saturday in Northwest Washington, but te 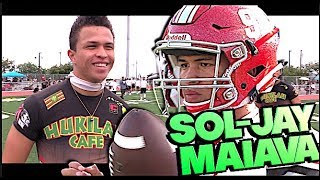 Player of the Week: Quarterback Sol-Jay Maiava of No. 3 St. John’s College (Washington, D.C.). In one of the wildest displays of offensive fireworks last weekend, Maiava was brilliant in SJC’s 59-49 victory at No. 20 Christian Brothers College (St. Louis, Mo.). In the game that produced 108 points, Maiava completed 22 of 33 passes (.667 completion percentage) for 376 yards and five touchdowns of 65, 26, 43, 39 and 14 yards. Maiava threw four of TDs in the opening half as St.

No. 2 Kahuku hosts No. 4 Mililani in an OIA Open Division showdown

JAY METZGER / SPECIAL TO THE STAR-ADVERTISER Kahuku quarterback Robbie Sauvao has six touchdown passes with two interceptions this season. Kahuku. Mililani. The undefeateds are heading for a huge clash on Saturday at Carleton E. Weimer Field in a game that counts for so much in the OIA Open standings. Mililani is relatively healthy and is coming off a 35-0 homecoming victory over Waianae. Kahuku is adjusting to life without one of the state’s top defenders while getting famil

@Jay_4QB was a high school star in Hawaii. His family moved 4,800 miles to help his college chances.

St. John's quarterback Sol-Jay Maiava and his family moved 4,800 miles from Hawaii to the D.C. suburbs. (Mark Gail/For The Washington Post) Rosemary Maiava-Peters took out her cellphone, opened the Facebook app and started a live stream for family members back in Hawaii. She pointed it in the direction of her eldest son, Sol-Jay Maiava, the home team’s starting quarterback. Sitting on the metal bleachers at St. John’s College High School during the last Saturday of August,

Kahuku’s Kawehena Johnson came up huge against Farrington in 2012. Star-Advertiser file photo. Since the first Honolulu Star-Advertiser Football Top 10 poll in 2010, there have been 16 meetings between the No. 1 and No. 2 teams in the state. No. 17 takes place Saturday night at Aloha Stadium when No. 1 Saint Louis, ranked No. 10 in country by MaxPreps and No. 11 by USA Today, plays No. 2 Kahuku in a rematch of the last three state finals. The Crusaders and Red Raiders have sp

Sol-Jay Maiava (photo by Joe Mumola) St. John’s football team opened up their championship-defending season with a 49-0 rout of the Johns Creek (GA) Gladiators. After the Cadets’ defense forced a 3-and-out on the opening drive, quarterback Sol-Jay Maiava ’20 stepped onto the field for the first time as a St. John’s Cadet. “I was excited,” he said after the game. “Couldn’t wait to play, we’ve been working so hard…I’m not gonna lie, I was a little nervous, walking down those

STEVEN ERLER / SPECIAL TO THE STAR-ADVERTISER Kahuku quarterback Thorton Alapa and the second-ranked Red Raiders open the season by welcoming Konawaena to the North Shore on Saturday. The first reaction was shock. Then came resolve. At Konawaena, football has always been tradition, going back to the dynasty — 12 BIIF titles in a row from 1980 to ’91 — and the success in the 26 seasons since. But traveling off-island to take on the Goliath on his home turf — Kahuku — is comple
1
2345
bottom of page